Competition, both online and locally. Limited advertising and marketing budgets. Short attention spans. These are just a few of the challenges many college stores face. So how do you overcome them and make sure that your store stays on your students' radar, without spending a fortune?

We heard some great suggestions in the latest segment of our Bookstores without Barriers series (Watch it here!), including working with student groups and creating eye-catching signage. By flexing your creativity a little bit, you can make even more of an impact — get started today with these three pointers from Brittney Helmrich and then check out the rest of her list at Business News Daily.

When you think about marketing, what's the first thing that comes to mind? You probably think of things like Internet ad campaigns, press releases, commercials and, of course, social media promotions. But marketing doesn't have to be the same old tactics you're used to – you can take it to the next level if you just think outside the box.

With a little creativity, you can raise your marketing campaign a few notches. And if it works, you'll probably never look at a press release the same way again.

Unfamiliar with flash mobs? Just imagine that you're out in public (say, a park or a train station) and suddenly, one by one, random people around you start dancing. Before you know it, everyone around you is doing a choreographed routine, leaving bystanders like yourself completely in awe.

People have used flash mob situations to do everything from propose marriage to raise awareness for social causes, so why not channel the idea for your marketing strategy? Bonus: If you film it, it can work as a viral video, too.

College Store Strategy: Call them flash mobs, or just choreographed spectacles — a quick spin around YouTube shows that flash mobs have popped up all over, with results ranging from hilarious to inspiring. While you may have missed your chance for a Thriller-inspired event for Halloween, you can still get a crowd together for a charitable cause, a campus event like graduation or just for fun! 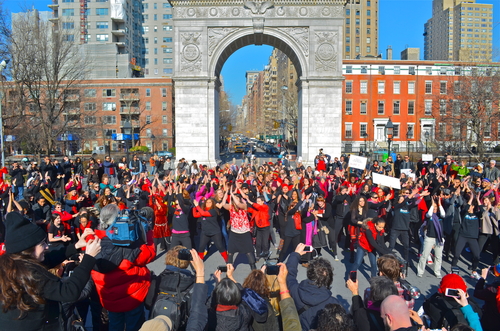 Back in 2012, furniture brand IKEA channeled famous graffiti artist Banksy in an ad campaign in conjunction with Milan Design Week. Putting up street-art-style posters that resembled graffiti all over subway stations as well as their own ads, IKEA's "People Bring Design to Life" guerrilla marketing campaign garnered the company a lot of attention.

Another great alternative? In 2009, fast food company Domino's Pizza teamed up with eco-friendly marketing firm GreenGraffiti to create "reverse graffiti" installments across New York, Los Angeles and Philadelphia. Unfamiliar with reverse graffiti? It takes advantage of already dirty sidewalks and paved areas by power-washing designs and ads into them using stencils. It's kind of like cleaning, but with marketing in mind.

Street art comes in many different forms, so if graffiti isn't the direction you want to head in, there are plenty of options at your disposal. The point is, do something unique, eye-catching and unexpected, and your business will definitely get attention. Just make sure you're not doing anything illegal in the process.

College Store Strategy: Hopefully there isn't anywhere on your campus neglected enough to try the "reverse graffiti" technique! But you could try something similar like chalk messages or drawings, or even creative rearranging of natural elements like leaves and branches. (Make sure you get permission first, if necessary.)

The old adage says that "no good deed goes unpunished," but from a marketing standpoint, companies like Starbucks would likely disagree. The coffee giant got media attention recently, thanks to one woman who sparked a "pay it forward" chain at the drive-thru after purchasing a coffee for the customer behind her. After nearly 11 hours of paying it forward, 378 customers had passed on the good deed.

While the Starbucks stunt may have started at random, the baristas at the drive-thru kept it going by explaining what was happening to each new customer. Businesses could easily take advantage of the pay-it-forward concept – all it takes is one person to start the trend, and not only will your customers be feeling great; they'll be talking about your business all day, too.

And paying it forward doesn't have to be something like paying for someone's coffee – you can make it about helping your community, too. By giving back and actively supporting charitable causes, you'll show your customers and clients that you're not just out to make money.

Speaking of paying it forward, our upcoming holiday promotion will invite you to #PayItForeword to other college stores! Stay tuned for more information — coming soon!

Our last free webinar from Bookstores without Barriers is November 12 — register now!