Today's post is courtesy of MBS Wholesale Marketing Rep Rob Heller. You can find more of his insights and musings about life, the textbook biz and a little bit of everything else on his blog. 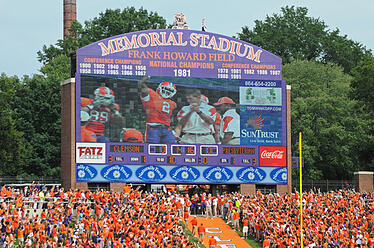 College football, it just means more in the South. We think nothing of rising before the rooster crows to drive hours for a noon kickoff. It’s setting up a tent in a dew covered, grassy lot. It’s the smell of smoked sausages on the grill, and the popping sound of a simmering kettle of grits. It’s Palmetto Cheese. It’s mimosas in a glass, and a pile of boiled peanuts shells at your feet.

“How’s your Mama and them?” we shout to the familiar faces playing corn hole in the adjacent space.

We walk through campus remembering how we were students, and wanting to be again. It’s fraternity row and the Quad. It’s sundresses. It’s khaki shorts and dress shirts, with bow ties in school colors.

The marching band drum line plays in the distance. The starting line-ups are heard over the stadium speakers. As if some cue to enter has been rung; a mass of uniform color swarms upon the ticket gates. It’s “Teal Nation,” or “Solid Orange;” “Black Magic,” or a “White-out” Saturday!

We clap in unison, struggling to keep our balance on the steep steps, searching for row “J.” It’s the “Marching 100,” “The Band that Shakes the Southland,” “The Pride of the (insert your mascot here).” It’s the scoreboard clock ticking down under ten minutes as we sing“God Bless America,” “America the Beautiful,” and “The Star Spangled Banner.”

Teams run through smoke and inflatable helmets. A chicken hatches in a giant egg, and some entrances are just better: the Buses, the Rock, the Hill.

We sway to Sandstorm while 300 Violins rock our Zombie Nation. Arms wave in a blinding motion for kickoff, then a boom from the cannon. It’s game time in the South!

It’s a long run, called back for an infraction, described as only referee Ron Cherry can: “Personal foul, offense 69, he was giving him the business, replay the down.”

It’s frustration when we run up the middle on 3rd and long. It’s hating the bubble screen and jet sweep. Dropped passes are killing us. Why can’t we score in the red zone? We’re leaving too many points on the field. It’s belief in halftime adjustments.

It’s keep your ticket stubs and hand stamps while the band plays a tribute to some long dead Spanish composer you never heard of. It’s posting tailgate pictures to Facebook. It’s long lines at restrooms and packed concourses under a misting fan to escape the heat.

We stand the entire second half, going hoarse by the final quarter. It’s holding four fingers high in the air because this is our house; we own this place!

It’s hope. It’s a no-call, push-off on a wheel route; it’s a catch! “They’re letting them play, Yeah!” He’s out of bounds with no time-outs. It’s counting off the distance for a long kick. There’s the snap. The hold. The kick is up and, … it’s not losing at home.

What’s your passion? Do you embrace and share it? Do your co-workers know your passion? A key element of morale is sharing in the joys of those around you. Passions bring joy. It’s what makes us smile on a Monday. People like to share and to be included. I encourage you to share your passion and live vicariously through others’ passions.

Have you tasted the mimosas and boiled peanuts?