How an Online Presence Saved a Business and Can Boost Yours

For millennial shoppers, a web presence is incredibly important when it comes to finding goods and services they want. Half of them use mobile devices to find products they need, while nearly 75 percent do online research before buying. That means a strong online presence is necessary to maintain a strong market share in today's industry — and that means showing up in search engines and having an easy-to-use store, not just having a web site or Facebook page.

It's a lesson one Toronto home painter learned the hard way, but better late than never. Brian Young, owner of Home Painters Toronto, didn't switch to promoting online with the market and took a big hit in sales. Anita Campbell with Small Business Trends shows us how Young bounced back bigger than ever. Read her whole story here.

Cold Calling Made His Business Hot

Young started the business 25 years ago, while he was still a student in college. Back then, when Student Painters came to campus offering its franchise-style model, he jumped at the opportunity.

“It had always been my dream to run a business since I was a kid growing up watching my dad. Student Painters was recruiting on campus, and my friend did it and recruited me into it. I thought, ‘this is my shot at running my own business,’ so I was really excited about that. It was my dream come true,” recalls Young.

“I learned how to do cold calling really well,” he said. “At the time I was young so I had all this energy. And cold calling didn’t take much time. You just had to go knock on doors and give them quotes on the spot. It’s more of a heart thing. Just go out and be as aggressive as you can. That was the way of marketing back then.” 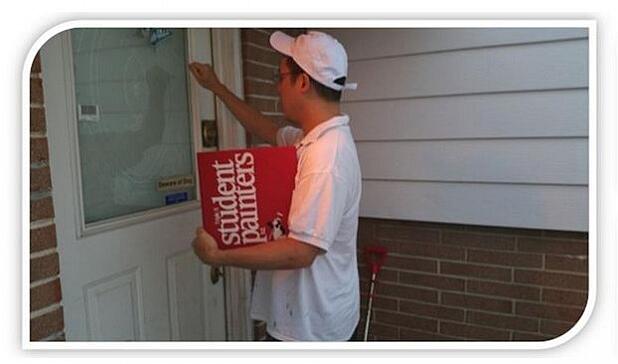 Upon graduation in 1991 Young went off on his own as an independent business owner.

His cold-calling marketing approach worked well for about a decade. Up through the late 1990s, “cold calling was the way to go,” he said.

The Internet Changes Everything

By the year 2000, though, the Internet had started gaining ground in the painting industry. Young began to notice consumers were going online to find painters.

Young’s world had irrevocably altered. He just wasn’t ready to admit it.

“I saw what was happening but I didn’t want to change. I’m like, ‘you know what, I’m a cold caller.’ I just kept knocking on doors,” recalled Young.

Yet, deep down, Young knew things were changing. “It was tough because I could feel my market going down, shrinking more and more and more.”

He soldiered on for another decade, watching sales gradually decline even though he was working harder than ever.

Young took stock of his business’s situation and it wasn’t pretty.

Up to that point, in 2011, his business was nowhere to be found online. Yet, that’s where his market was.

“So, I hired a consultant who helped me get my business online almost overnight. We worked ninja style. I was like, ‘What do we need now? And what do we need next?’ So we got a website. We joined some review sites. We implemented email marketing. One by one, we just kept nailing them,” said Young.

A major milestone for Young and his Home Painters Toronto business came just a month or so into the online transformation.

One of his first steps was to advertise using Google AdWords. “We had to do it because we were nowhere to be found in Google search results at that time,” he pointed out.

Advertising with AdWords required a huge leap. It meant spending more money than he had ever spent on marketing.

Prior to that time, his marketing budget was just $500 a year. “I’d do my lawn signs, and I would buy business cards. That was it. I was really cheap,” he laughs.

But almost immediately he saw the benefits of marketing online.

“For the first time in my life I didn’t have to cold call a house. That was significant. I was getting leads coming in – they’re called inbound leads — and that pretty much was the start of how things worked out. As more people found us online, things really started taking off.”

The Online Strategy to Refresh a Home Painting Business

“Our goal now is to grow 20 to 30 percent a year. At the same time, I want to get my customer satisfaction ratings higher. We’re at 98.5 percent. We’re going to shoot for 99 percent customer satisfaction and encourage more online reviews. That’s how you have to market a business like this, is through reviews," he added.

“Before, in my business, you could upset someone, and then you could just not work on that street for the next five years and they’d forget. But now online, everything is exposed and you’re vulnerable that way. So you have to be impeccable about making sure every customer is taken of, no matter what. It raises the game of the business owner, and gives the customer more protection.”

In addition to advertising with AdWords, developing high customer satisfaction rates and encouraging positive reviews, there are a few other arrows in Young’s marketing quiver.

The company also pursues content marketing and search engine optimization as part of its strategy. ”For a year solid I’ve blogged two or three times a week,” points out Young.

Articles such as “What Causes Paint to Bubble, Crack and Peel?” and “Bringing Warmth to a Room with Ceiling Paint” give consumers the sort of relevant information they are looking for when researching painters, Young says. Content marketing also has helped the company’s website rank well for Toronto painter searches.

Even though his company was playing catch up, Young soon discovered that most of the painting industry was “still way behind.”

“Now they copy what we do. But they can’t keep up. Not that I’m trying to put the competition down — just saying that’s what is happening. My business has become the pacesetter.”