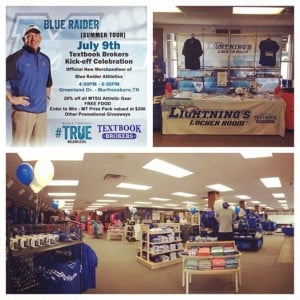 The promotional collage posted to the store's Facebook page.

"We have historically been only a textbook provider. With our range limited to textbook sales, we changed. Over the course of the year, we've brought in new apparel," said store manager Robert Batcheller. So to help get the word out and get people in the store, Textbook Brokers - Murfreesboro hosted the kickoff of the Blue Raider Summer Tour, where the Middle Tennessee State football program will travel around the area to get people excited about their upcoming season.

For the kickoff, Textbook Brokers - Murfreesboro offered free food, 20 percent off all Middle Tennessee State athletic gear, and a raffle where the winner would receive $200 worth of team gear. Regarding the raffle prize, Batcheller described it as "a merchandise sampling that was a good representation of what was in the store. Hat, t-shirt, jersey, mugs, car stickers, croakies." For the uninformed, croakies are string or rope-like material that attaches to sunglasses, and allows people to hang them around their necks.

The kickoff event, which occurred on July 9, had a turnout of about 75 people despite only lasting two hours. Though this was a short event focusing on something besides textbooks, Textbook Brokers - Murfreesboro is optimistic that their new partnership and the apparel options that come with it will keep people coming into their store. When asked about how the partnership is affecting his store, Batcheller replied, "Since we inked the deal, it's been very good for furthering the relationship [between the store and the Middle Tennessee state athletic department]."