Would your employees be willing to “get pied” for a great cause? Last week, the staff of College Corner Coffee & Books in Alma, Mich. volunteered their faces for target practice for a pie-throwing event to raise money and awareness for Relay for Life of Gratiot County.

A few weeks before the Relay for Life event, the staff put out jars with a picture of each volunteer on the counter. The community then “voted” by placing donations into the jar of the employee that they wanted to see get a pie in the face. The initial idea for the “Pie an Employee” fundraiser came from staff member Tim, who had participated in a similar event at his fraternity.

“The idea went over very well,” store manager Erica Guerrero said. “Everyone who saw the display thought it was a cool, fun idea. Some customers even volunteered to have their own jar next year!”

After the voting was complete, the top three “winning” employees received a whipped cream pie (complete with cherry on top) in the face, with an approving audience of coworkers and customers. Tim's pie had sprinkles as well, to celebrate his birthday.

In conjunction with “Pie an Employee,” the store also held a “Cancer Sucks” fundraiser at the nearby Bravehearts Pub, which included a bake sale, gong karaoke, a silent auction and a 50/50 raffle. According to Guerrero, both events were a big hit with the community and a great opportunity to raise awareness for a worthy cause. 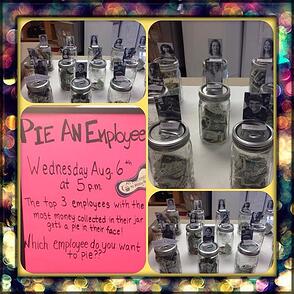 “Relay for Life is an event that I personally care deeply for,” Guerrero said. “To do something that was so fun and everyone enjoyed and took part in was amazing,“

“We will do this again next year, and hopefully for years to follow,” she said. “For anyone who wants to do the pie in the face or anything similar, make sure that everyone knows the reason for the event and just have fun with the whole thing!”