For many college stores, summer means a slower pace and less foot traffic. Though it can be tough to come up with new ways to make your store stand out,  knowing what other stores have tried can be a big time-saver. That was the case for Director of Campus Stores Margo Ketels of the University of Dubuque's Babka Bookstore, who found inspiration right here on Foreword Online.

“We have a small store but we do a ton of volume," she said. "We're always trying to come up with fun stuff to do to attract some attention for the store.”

"I remembered reading an article on Foreword Online about how St. Mary's University Bookstore created a dead book display — the idea of a dress made out of the pages of old books sounded awesome, and perfect for our store."

Ketels says that she knew right away that Merchandise Manager Jennifer Wickman would be the perfect person to bring the idea to life.

"She’s really creative, and always up for fun stuff," she said. "Since she used to be a seamstress, I forwarded the article to her to see if she was interested in putting together something similar for our store." 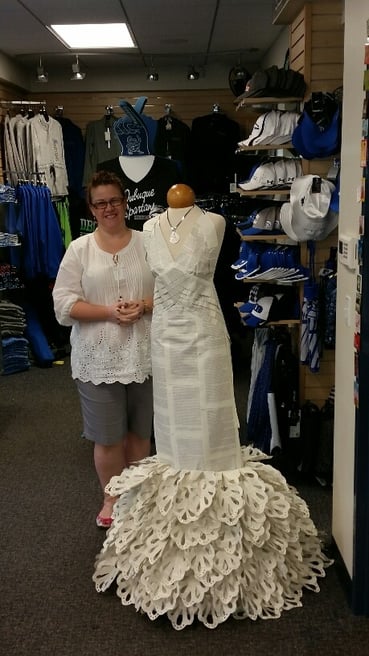 A couple of hours later, Ketels went up to check in and found that Wickman was already hard at work on her own creation. After about 14 hours over the course of two days, the dress was complete.

This project began as a creative way to attract attention to the University Bookstore. As it progressed a thought process also took hold. It was named Dead Book Society because we had chosen a random dead book for the shade and quality of the paper, not the work within. As the pieces were cut and shaped some of the author’s phrases began to burrow into the work and became something more. While unfamiliar with the book as a whole, language choices made by the author took on new meaning.

The quote on the pendant started as a bit of a joke because there was no ‘significance’ to the choice. There was no message being broadcast through a decision. However, as certain pages were read, thought provoking statements became better known. The favorite being “Ideas Die Slowly”. (Now circled in red ink on the right side of the gown.) After all, isn’t that what a book is? An idea that has taken physical form and continues in the minds of those who absorb it.

Although the summer is typically a slower time for the bookstore, Ketels says that the dress has already attracted a lot of attention and that they plan to leave it up through rush.