Coker College Bookstore Increases Buyback by 59% with a Sweet Promotion

Students typically have a negative perception of their college bookstore, especially during buyback. So, anything you can do to enhance your image and drive traffic to this important event is essential to your success. Last semester, Emily Phillips, director of campus retail operations at Coker College Bookstore, found a way to accomplish both of these key tasks.

The store’s goal was to encourage more participation in buyback, so Phillips and her staff decided to capitalize on the most important aspect for students: cash. The store marketed their buyback as a payday, by tying in the candy bar with the same name.

“We handed out Paydays to every student who sold their books at our buyback,” she explained. “Each candy bar had a coupon attached to it that offered students a specific door prize. We kept the prizes behind the counter, so they simply had to show us their coupon to redeem it.”

The door prizes consisted of store items that Phillips selected. They included low cost items such as toiletries, branded sunglasses and decals as well as more expensive merchandise including t-shirts and a foldable chair for athletic events.

“We had 100 door prizes, so the promotion was offered while supplies lasted,” she described. “I wasn’t sure what to expect, since this was the first time we’d offered it, but we gave all the prizes away in just two days!” 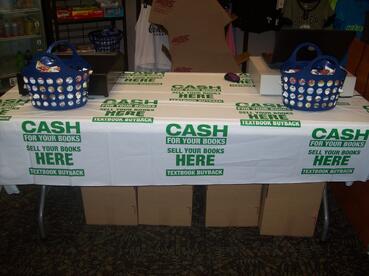 Students still had a chance to win, however. Each student who sold their books back could enter their name into a drawing for a $100 store gift card, even after the prizes were gone. The winner could use the funds toward the purchase of textbooks for the following semester.

The store advertised both promotions simultaneously through social media, email and promotional materials.

“We used the footprints from MBS’ Promo Guide to direct students to the event. Traffic flows into the store through three different areas, so we had them going in all directions!” she said. “We also put a flyer on every dorm door, which I think was very effective.”

In the end, the promotion wasn’t just a payday for students. It definitely paid off for the store, as well!

“We had the best buyback we’ve had in the last four years! Students loved the prizes, and everyone was anxious to find out who won the $100 gift card. It not only generated excitement and enthusiasm but also significantly increased the number of students participating.” Phillips emphasized. “In fact, our buyback was up 59% compared to December 2012.”

Based on the outstanding results, Phillips plans to implement the idea again in the future.

“I think it actually educated students who weren’t familiar with buyback or didn’t understand how it worked, which will continue to benefit us in the future,” she explained. “I’m not sure if we’ll do the exact same thing again this semester, but we’ll definitely do something similar, because it worked so well!”