Between Facebook, Twitter and Instagram students are constantly snapping photos and, chances are, most of them are “selfies.” Taking advantage of the latest rage, Edinboro University Campus Bookstore hosted a Selfie Spectacular during buyback as a way to gain student attention and bring them into the store.

“Our Facebook page has been kind of stagnant lately, so when I had a new student take over managing it, we decided it was time to do something that would spur some interaction,” explained Ray Fisher, general manager of Edinboro University Services, Inc. “When we were throwing around ideas, a lightbulb went off; my student employee Brandon mentioned that selfies are really popular right now and we agreed that they’re the perfect way to get a buzz going.” 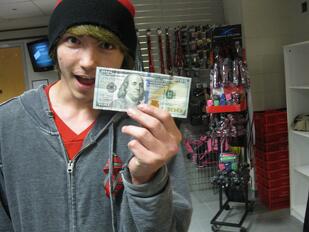 The concept was simple: they encouraged students to take a selfie inside the store and post it to Edinboro University Campus Bookstore’s Facebook page throughout the week of buyback and rental returns. Students could submit a different selfie each day of the week, but were limited to one entry per day. Then, they randomly selected one daily winner who received a $100 cash prize!

“We never specified that students needed to promote our store in any way with their photo, just that it be taken inside,” Fisher added. “What’s interesting is that so many of them have been advertising for us without ever being prompted to! They’re picking up merchandise, showing off apparel, posing with in-store displays – it’s been a great way for us to spread the word about what we offer.”

“Many of them have captions that are actually advertising how awesome the store is too,” added Brandon Winkler, student cashier and Facebook administrator. “We’re also seeing several students coming in each day to take a new photo entry. It’s helped create a lot of repeat traffic.”

Not only has the Selfie Spectacular gained the store traffic in store, but also it’s also significantly impacted their social media statistics.

“Our likes are up by 6 percent, our post reach increased by 100 percent, our total reach by 229 percent and – this is the big one – the percentage of people engaged has skyrocketed by 642%!” he described. “We’re reaching more people and more effectively connecting with them. It’s been incredibly successful at jumpstarting our Facebook presence.”

Popularity for the contest has only been growing as the days pass by. On Monday, the store had 22 entries, followed by 27 more the second day and an additional 65 by mid week.

“It’s been really popular and continues to pick up steam,” Fisher emphasized. “We haven’t even reached the busiest days of buyback yet, so we’re expecting a big jump at the end of the week. I’m anticipating at least 100 entries per day.”

With such amazing participation, Fisher and Winkler are both impressed with the results thus far and eager to see what the end of the promotion brings.

“We’re pretty excited about it,” he said. “It’s made students talk about us and showed them we’re the hip, fun place to be. It’s about improving our image in students’ eyes and building some excitement during an important time of the year.”

“Buyback is the time you want to win over students and bring them into the store, because each one that stops by has at least one textbook to sell,” Winkler agreed. “This contest was a great way to do that and we’re really happy with the way it’s taken off!”