When students think of their college bookstore, many simply see dollar signs, thinking only of the place they go to spend money on textbooks. So, as collegiate retailers, you have to work extra hard to change that perception. Waubonsee Community College Bookstore recently came up with a contest that helped prove their dedication to affordability.

The school hosted a Sweet Savings contest this semester that offered students the chance to win free textbooks for the semester. Not only did the promotion shed a positive light on the store, but also helped to drive traffic during a slow time of the year.

“We wanted to bring students back into the store after rush, so we decided to add an incentive to stopping by,” explained Joanne Leibold, store manager. “The winners of our contest would receive up to $400 of free textbooks. If students had already purchased their textbooks from us, then we would reimburse their cost up to that dollar amount. If they had purchased them elsewhere, then they could use $400 toward the cost of their summer books or opt to receive a $300 store gift card instead.”

The store advertised the giveaway by handing out candy bars in remote locations that were near classrooms. On the back of each candy bar was an entry form that had to be returned to the store in order to qualify. With over 800 to give out, the store was surprised when they ran out the first morning! 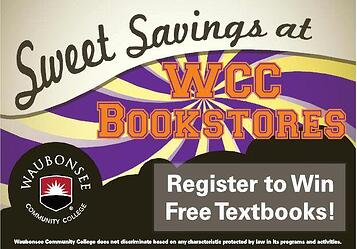 “They went quickly, that’s for sure!” she said.

Even after the candy bar part of the promotion was complete, students could enter once per day either in-store or online.

“That was our way of encouraging repeat visits,” Leibold said. “Whether they’re visiting our store or our website, it’s always good to get them in the routine of coming back.”

In total, the store had nearly 600 online entries and 350 in-store, totally almost 1000 entries. Although Leibold hadn’t calculated the number of unique individuals who participated in the contest, she was impressed with the turnout.

“All the students were excited, and we had several check with us to see if we’d announced the winner yet,” she said. “Those who got candy bars were definitely happy; it’s always good to generate positive PR.”

To announce the winners, the store took a different approach. They posted the winning online entrant’s student ID number to their website and the in-store winner’s on a sign in their store. If the winning student discovered his/her posted number, prior to the official announcement of the winners, they would receive an additional $100 in “XCASH,” the campuses specific payment method used at the bookstore and cafeteria.

“The idea was to get them to keep visiting these places to find out if they won,” she described. “Our online winner found her number right away. The in-store winner took a lot longer, and unfortunately we didn’t see many students coming in to check.”

All in all, the store was satisfied with the promotion and the results they received. In fact, they plan to implement it again with just a few minor adjustments.

“We did pretty good for the first time around. I think we can fine tune it even further to make it better for next semester,” Leibold said. “I think we’ll get more participation if we really push the fact that students can use the money as reimbursement for textbooks that have already been purchased. That’s something that caused a bit of confusion this time. It was a learning process and one we’ll use to further improve our promotions in the future.”