What We Have in Common with the Kansas City Royals

Last weekend, the Kansas City Royals made history by beating the New York Mets in Game 5 to score their second World Series win in four appearances. First and foremost, we wish the team a big congrats from down Interstate 70! 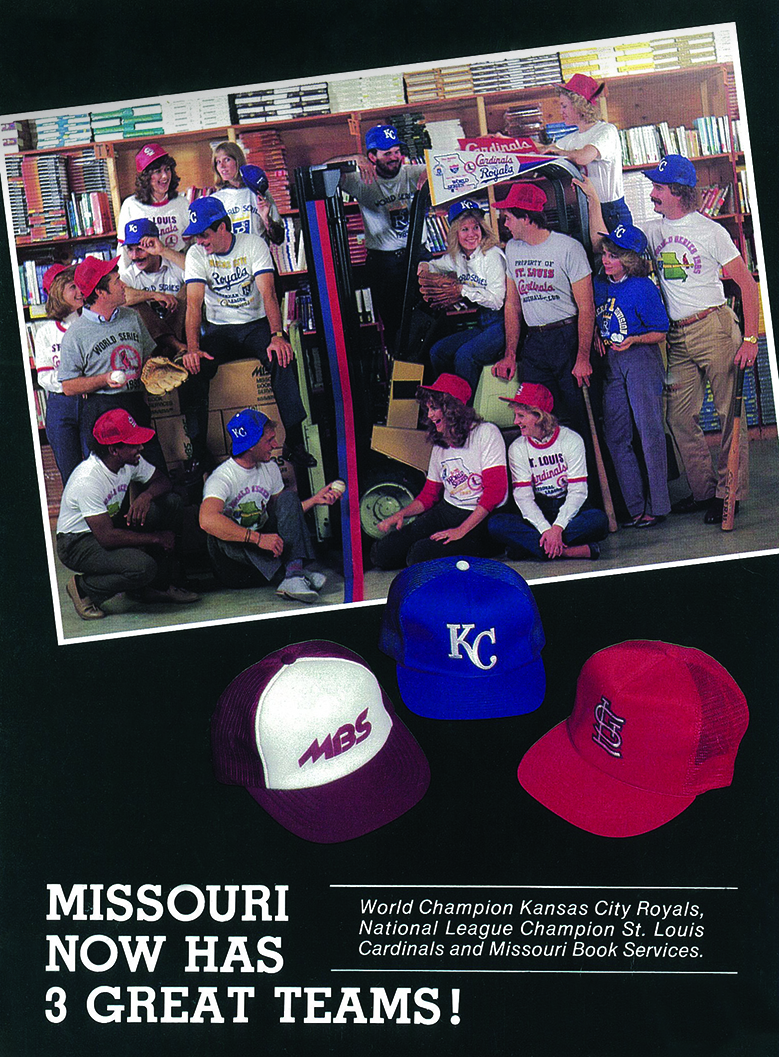 Being centrally located between St. Louis and Kansas City, MBS has had its share of both Cards and Royals fans over the years. In this 1985 CAMEX ad, you can spot Territory Managers Esther Rosner repping the Cardinals, and Dan Dippold showing support for the Royals. "I must have been brainwashed," Dan said. " I see that picture and I can't remember how I ever would have put a Royals hat on. Nothing against the Royals, but I grew up in St. Louis. I’m a big Cards fan."

While it was exciting for many here to cheer one of our state's MLB teams to victory, many who worked here 30 years ago were reminded of their first big win in the famous I-70 series, edging out the St. Louis Cardinals.

1985 was a big year for us, too. Though we'd still be Missouri Book Services for another two years, we had fun with both teams in the World Series being a few hours' drive down the highway in our CAMEX ad that year. The MBS System was still in its early stages, and most of the automated processes handled by specialized employees today were still manual jobs for anyone and everyone to tackle as needed.

"My job was twofold back then," said Vice President Nelson Durk. "I've always done what I'm doing now [contracts], but when we were smaller, I did a wide combination of things in receiving and administration. We'd all do a little bit of this and a little bit of that. When there wasn't so much technology, basically we all had pen and paper stuff that had to be done. Even [President] Dan Schuppan would be down on the floor checking orders."

While the switch over the next three decades from labor-intensive pen-and-paper processes to faster, more efficient electronic methods made work less busy at times for Nelson and his team, the changing nature of the industry has always kept people busy through the years.

"Book buyers have a lot more things they have to know now," he said. "In the '80s, books were books, but now there are teacher editions, titles with CDs, access codes, a lot more people have to call about to verify that they have what we want. We used to get maybe 100 calls a week about that, now it's more than 200 a day."

Territory Manager Dan Dippold says technology also made his job in the field as a sales rep much easier. When he first started, stores that needed to contact him called order processing and left a message, which would be jotted down and tacked to a bulletin board. Dan would have to find a payphone to call into MBS before 5 p.m. Central time — which was the middle of the afternoon for him in California — so he could reach someone and get his messages.

"I remember how excited we were when we got voice mail in the building," he said. "We could suddenly call and get our messages any time of the day. "It seems kind of silly, but it was a big deal back then."

Technology continues to evolve in the warehouse as well. Before he was solving and resolving issues for partner stores, Internal Audit Manager David Brown started his career with MBS in the warehouse back in 1976 — which is also nearly unrecognizable today. Ordering was a computerized process even then, but every package had to be physically handled at every step of the way, creating lots of work for a smaller warehouse staff. Today, miles of conveyor belts and automated sorting machines keep the ordering process moving at high speeds through the warehouse day and night.

But one thing that hasn't changed is our commitment to our partner institutions, and our ability to rely on each other. David likened it to both the Royals: we achieve our success through hard workers coming together as a whole.

"Both organizations are, to me, the ultimate teams," he said. "They don't rely on superstars, they have good players but everybody contributes."