Wisconsin's University Book Store is Along for the Ride...Again

At the University of Wisconsin, March Madness has bled into April. Most university bookstores can only dream of getting a single opportunity to support their school’s basketball team as they advance all the way to the Final Four of the NCAA tournament. Wisconsin, however, has not only gotten to do this once – they are doing it for the second year in a row.

Four new styles arrived this morning! #Badgers #FinalFour Check out the image for which styles are in store now! pic.twitter.com/UWhjzjkmu2

That doesn’t mean that UW’s University Book Store staff is getting complacent, however. Even with Wisconsin students currently away from campus on spring break, there’s a buzz about the team around campus and the store’s sales, especially online, are doing extremely well. “We got about 600 online orders in the first night,” said The University Book Store President Patrick McGowan, referring to the evening when Wisconsin defeated the University of Arizona in the Elite Eight. 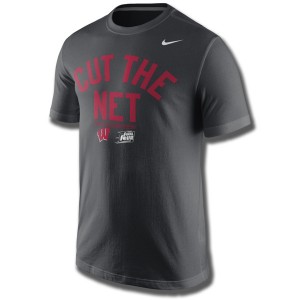 When the clock hit zero against Arizona, the Book Store was prepared with 34 Final Four themed items, including shirts, sweatshirts, hats, banners and much more all ready to be released to the public once Wisconsin’s advancement was official. Almost immediately, the staff got to work on promoting items and letting Badgers fans know where they could find their new gear. “Most of the stuff we did was social media-related,” McGowan said. “The biggest effort of our people was through Facebook, Twitter and Instagram to make sure customers knew where things were available. So far, Nike’s ‘Cut the Net’ shirts have been our most popular item.”

The Book Store’s emphasis on social media has been a theme throughout the team’s tournament run. Before the Badgers played their first game, Book Store employees introduced their March Madness Twitter Challenge, where the store would select a random game each round and if the participant chose the winner correctly, he or she would be entered to win a prize drawing, starting with a $5 gift card to use next time they visited the Book Store. The prizes have gotten progressively more valuable as the tournament has gone on, with a Wisconsin jersey being the big prize during their last giveaway during the Elite Eight.

When you combine the hard work of their staff with the luck of having their team continue to advance round after round, it’s not difficult to see how The University Book Store is currently experiencing one of their most active and successful sales periods of their year. Of course, McGowan and his staff are hoping that the team’s run isn't quite over.