Create a Finals Oasis in Your Campus Store

You don’t need an advanced degree in psychology to find ways your campus store can boost college student wellness during finals. Even a short time in a calming environment can help many students navigate academic challenges at the end of the term. Here’s how you can transform a portion of your campus store into a hub that invites students to take a much-needed break. 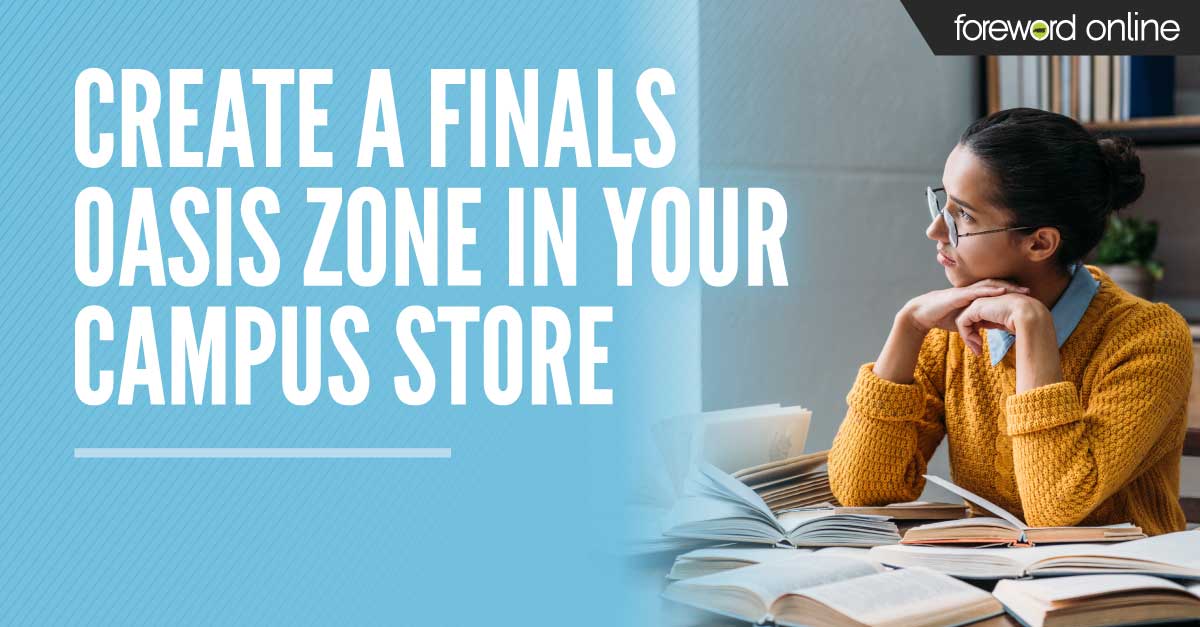 Why college students are struggling with wellness

Theories abound about why college students are reporting high levels of mental illness. Some blame the impact of smartphones and social media. Others credit current politics or financial uncertainty. Others still point to perennial suspects like diet and genes.

Whatever the causes of college student wellness struggles, two recognized phenomena can guide campus stores. First, students who experience prolonged mental distress are not marginal. Among college students, such concerns are the norm.

In a recent Barnes & Noble College study on student wellness:

Second, final exams can be excessively stressful even to those without a predisposition for anxiety or other mental health troubles. Research shows that long periods of sitting combined with busy mental activity leave us overstressed, depleted and mentally foggy. When we mentally separate from our physiological sense experience, we not only lose touch with our physical needs — we can lose touch with reality.

Finals week at most colleges is replete with pressure to engage in just the sort of abstracted mental activity that can become toxic if left unchecked. Exam preparation often involves hours of cognitive labor, conducted in hard chairs, under harsh fluorescent lights within colorless spaces like computer labs or library cubicles.

With a few artful touches, your campus store can provide students with a sensory anecdote to the academic grind. Even a short break from long stretches of abstracted thinking can help students reboot and restore the mental clarity they need for academic success.

The sights, sounds, smells and thoughts that can offer college students stress relief

Despite vast diversity in taste, research suggests that some sights, sounds, smells and even thoughts are more reliably soothing (or stressful) than others. For example, a Minnesota State University study found that red increased stress in participants. Green elicited a neutral response.

With commonalities like that in mind, you can apply what interior designers call “staging techniques” to an area of your store during finals. Assemble a collection of sensory experiences that can help establish a relaxing atmosphere for students.

Sight — Adjust the light and color for health and well-being

It would be hard to find images or other visual cues that reliably induce calm in everyone. One famous study that contrasted how U.S. college students and Tibetan monks reacted to the same visual cue is case and point. Researchers measured the physiological response the two groups had to a picture of a bunny rabbit.

The bunny triggered a reduced stress response in the students but spiked anxiety in the monks. The Tibetans’ meditation practice had lowered their general anxiety levels, while also training them to be highly sensitive to vulnerability in living beings. The monks immediately worried about how such a defenseless creature could protect itself from predators. The American students had no such concern.

Rather than choosing specific images for your oasis zone, think about how you can work with light and color. Research shows that blue tends to trigger the most reliably positive response.

Palmer posited that blue might have more universal appeal than other colors, because it’s associated with natural occurrences that have positive associations across cultures. Think of a clear sky reflected in a Himalayan glacier pool. Let this inspire the color choices you make for your oasis zone.

The paper, which compiled and assessed results from decades of disparate studies, found that workers with regular exposure to natural light were not just happier but healthier, more productive and less likely to quit. This, in turn, translated into fewer financial losses for the employers from turnover and employee sick days.

The unnatural light often found in libraries, computer labs and classrooms also interferes with students’ circadian rhythms, tricking their brains into thinking it’s daytime long after the sunset, according to healthcare practitioners. In addition, many researchers have expressed concern about how the increased time we spend in front of bright screens affects sleep and anxiety, especially among young people.

“We should all be paying attention to this,” Dr. Charles Caeisler, chief of the division of sleep and circadian disorders at Boston’s Brigham Women’s Hospital told the New York Times. “The whole temporal environment has been turned upside down.”

Try to place your oasis zone in a part of the store that exposes students to natural light and minimizes access to screens. If your store offers televisions or video games, establish the oasis in a section removed from that part of the store. Or, designate a time of day during finals when the screens will be turned off.

You can outfit your zone with a variety of colors. However, letting saturated blues predominate is most likely to set the stage for relaxation.

Studies show music has a powerful impact on our minds and bodies. In numerous hospital settings, scientists have found that soothing music reduces stress and correlates to lower anxiety levels, which in turn facilitates healing.

Of course, like color and imagery, not all music works the same way on the same minds. If you want to play soothing sounds in your finals oasis, consider tracks with characteristics like those Science Daily recommends, which have been shown to calm participants in scientific studies. Slower rhythms and regular tempos tend to lower anxiety while irregular tempos and super-fast beats can have the opposite effect.

If you’re looking for music to play throughout your store, you could select from a number of these suggestions for ambient music. All have characteristics that align with what research suggests about calming sound. Or, you might feature natural sounds like rain or waves, which are also associated with reduced anxiety.

In one study, a group of patients awaiting coronary bypass surgery listened to natural sounds for 30 minutes on headphones. Another group wore headphones that played only silence. The mean anxiety level of the group listening to nature sounds was found to be significantly lower than the group’s that heard only silence.

If your store sells electronics, you might consider giving students access to headphones in the oasis zone. Invite them to sample sounds and discover which ones they find most conducive to calm and clarity.

Smell — Give students a choice of scents

There’s no shortage of pop health advice about which scents induce calm, energy or robust health. Essential oils like lavender, clove or bergamot are often marketed as aromatherapy for the body and mind. However, scientific research that demonstrates the effectiveness of aromatherapy is inconsistent and minimal, according to the National Institutes of Health (NIH). One much-discussed study found that lavender has a disruptive effect on hormones associated with stress. Another study showed that exposure to lemon essential oil correlates to improved mood, according to the NIH.

This doesn’t mean scents have no impact. Someone who loves the smell of peppermint may genuinely feel lighter after adding some drops to a diffuser. Someone else could have the same response to chamomile or geranium.

Instead of trying to find one or two scents that please everyone, consider offering students the opportunity to sample a variety of oils. When University of California Davis Stores hosted a de-stress event for finals week, organizers invited a group of aromatherapists. These professional scent consultants volunteered to be available to students for an afternoon. That allowed curious students to try different scents and find ones that worked best for them.

In much Buddhist thought, the mind is also regarded as one of the senses. Many meditation practices include instructions for grounding your mind with attention to sights, sounds, smells, tastes and sensations. Even a few minutes of such effort can bring focus back to the present — and relief from exhausting worries about the future.

You could simply post a sign in your oasis zone that invites students to meditate. You don’t need fancy cushions. Any comfortable chair that makes it easy to sit up in a straight, relaxed posture is ideal.

You might also provide access to one of several smartphone apps that offer simple meditation instructions. Calm, Headspace and Buddhify are among the most well-reviewed. Each includes guided sessions for beginners of varying lengths. Some are no longer than 90 seconds. The Calm app has a series tailored to college students. It also has a set of short sessions called “Panic SOS,” which is designed for people in the throes of crushing anxiety.

Even if you can’t employ every one of the sense-based strategies above, you can think of your finals oasis as a healthy reminder. Let students know that it’s okay to give positive attention to their senses — and physical health — even when the pressure to stay on top of cognitive tasks is high. Indeed, time off from thinking may well help them think better after they leave your store.