When the Flyer Spirit Store at the University of Dayton decided it was time to open up a new space, they didn’t have to look far. 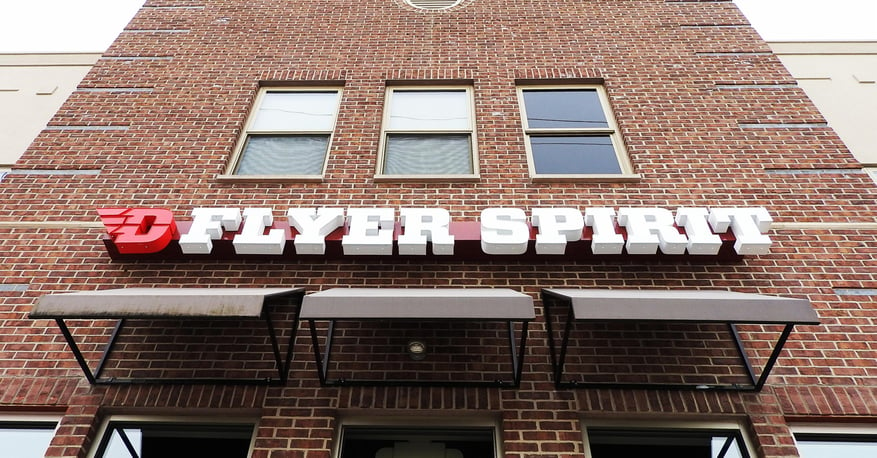 “We were lucky,” said Merchandise Manager Katie Overholser. “We got to move right next door.”

The planning and implementation that went into the move began last October and continued into the spring semester. On April 1st, Flyer Spirit reopened to the public with a new look and a more open layout.

In the intervening months, the store tried to balance preparing for its future on the other side of the wall with its ongoing day-to-day operations. In order to save costs, Overholser wanted to reuse as many items from the old store as possible in the new space. 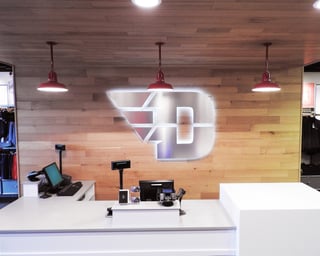 “It was a challenge to reuse as many things as possible and still keep our store presentable in the meantime,” she said. “There were lots of fumes and noises from the construction, so we had to work through it.”

In the end, however, the Flyer Spirit customers understood that any temporary inconvenience would be worth the wait. “The promise of a brand new store is always a good thing for our customers,” she said.

One of the things Overholser and her staff most wanted to feature in the new space was the university’s new logo, unveiled back in 2014. According to Overholser, the old store was “very graphic heavy” and prominently featured the school’s since-retired logo.

“The old space needed a face lift – it was a little dark,” she said. “The new space is much brighter, and it really features this new logo.”

With the new logo, comes new apparel, and Flyer Spirit did whatever they could to spread the word about their new space in order to draw in more customers. “We did a re-grand opening sale,” Overholser said. “We’re a Catholic institution, so we did a blessing of the store. We invited administration to come in and visit. We did radio spots and a free t-shirt giveaway.”

Because of the short-distance move, Flyer Spirit still has no trouble reaching those few who managed to remain unaware of the store’s marketing efforts. “We get a lot of customers who don’t even realize they’re in a different space because we’re right next to our old location,” Overholser said. 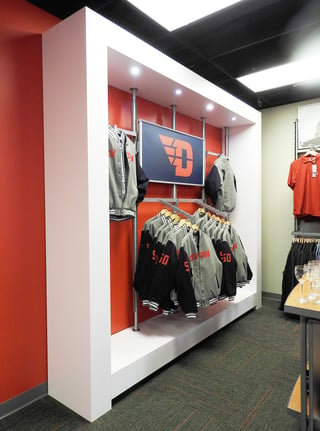 One of the other great features of the new store is the much-smaller cash wrap. In the old location, there were occasional problems with overcrowding due to a large cash register area at the front of the store. This new approach helps customers flow through the store without getting bogged down almost as soon as they walk in the doors.

The success of the new Flyer Spirit will not just be because of store management and its customers, of course. Cooperation and buy-in was required from everyone involved.

“The student employees were great throughout. Then the big thing for us was having the administration involved. They’ve totally been on our side [throughout the whole process],” Overholser said.

Now that the move is complete and the store is reopened, the Flyer Spirit staff can get back to business as it was before October 2015, by focusing primarily on their customers. The new store is much more “professional focused” according to Overholser, featuring several legacy brands that they believe will be particularly attractive to their customer base.

It’s safe to say Flyer Spirit and the University of Dayton as a whole are satisfied with the way things have turned out. And with all the work that went into making their new store a success, why wouldn’t they?