With their men’s basketball team going through perhaps the greatest era in school history, excitement on the Iowa State campus is at an all-time high. Capitalizing on that hype is the Iowa State Bookstore, who first launched a promotion called “Magic Monday” (a reference to ISU’s Hilton Magic) at the mid-way through the 2013-14 season.

“The idea came from one of our staff members who’s a big basketball fan and had seen a very similar idea at another school,” said the bookstore’s Marketing & Customer Service Manager, Amy DeLashmutt.

The promotion is dependent on the results of the final men’s basketball game each week; the more points the team scores, the bigger the discount. Discounts range between 10 percent off if the team scores 60 or more points to 25 percent for 90 or more, and is applicable both in-store and online for any ISU clothing or gift item, with the exception of sale items and Under Armour apparel. 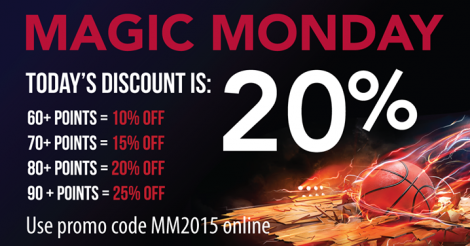 Since the promotion doesn’t start until the beginning of Big 12 conference play, the bookstore has only had a couple Magic Mondays so far this season, but they’ve already had a big winner. On Saturday, January 17, the Cyclones knocked off the ninth-ranked ranked University of Kansas Jayhawks by a score of 86-81, meaning Monday the 19th became a Magic Monday with a 20 percent discount. “Everybody on campus was so excited after that win,” said DeLashmutt. “That’s one of our biggest rivalries!”

Considering the success of the Cyclones, there’s a good chance that the Iowa State Bookstore will be running this promotion later than most stores would have the opportunity to. Not that that’s a problem for DeLashmutt or her staff. “We plan on continuing Magic Mondays through the NCAA tournament,” she said, “Having the team last that long isn’t just good for this promotion; it gives us a chance to promote some late-semester stuff as well.”