It’s a tradition that goes back nearly two decades: every year, the bookstore staff of Memorial University at Newfoundland work together to raise money for their community. Initially, the donation resulted from the sale of their handmade crafts, with the recipients being a single-parent family in need.

Eventually, staff members decided they could make a greater impact on campus and help their students directly by giving the funds to the campus food bank. The craft sale became a raffle, with 100 percent of ticket sales going to the food bank; this year they raised an impressive $1200.

The generosity of the University Bookstore staff is still the driving force behind the event, as employees contribute all of the money to purchase the prize. This year, the winner of the raffle received a Christmas-themed “bouquet” with boxes of chocolates and a selection of gift cards for local businesses totaling $285.

“There’s not much visual impact to gift cards in an envelope, so one of our former employees (who’s married to our current returns processor) arranged them in a bouquet for us. So that traditional handmade craft element is still there,” said Steven Granter, Web and digital coordinator for the store.

To promote the raffle, the staff puts up posters around campus and follows up with promotion on Facebook and Twitter. Because the event overlaps with their annual Customer Appreciation Day, they cross-promote on those posters as well. 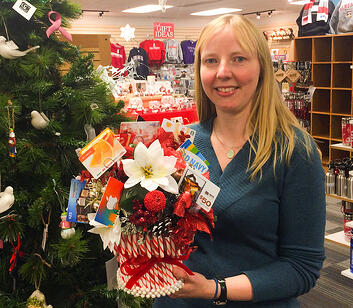 The prize is displayed right behind the checkout, with lots of signage there and throughout the store.

“Our cashiers do a great job of letting customers know about the fundraiser and the largest portion of our ticket sales are in-store through point-of-sale,” said Granter.

“Wanda, one of our senior staff members, will actually walk all over campus, tickets in hand, selling directly to staff in the many departments and administrative units. This year, Wanda was responsible for more than a quarter of our total tickets sold. If you have someone on your staff with those kinds of connections on campus, you really can't beat that sort of face-to-face direct appeal.”

A major factor in the success of any event is community involvement and Granter and the other bookstore staff members recognize the importance of their students’ participation. “Students seem to be more informed and aware of issues like food security on campus than when the fundraiser started in the 1990s,” he said. “Because the food bank directly supports students, their donation makes a real impact right here on campus.”

To other college stores who might want to organize something similar, Granter recommends tying a charitable fundraiser to another event.

“A challenge with this time of year is getting in-store traffic. We always run this contest around the same time as our Customer Appreciation Day Sale, which is a one-day sale on the last staff payday in November. It's our biggest non-clearance sale of the year, with a 20 percent discount on all general merchandise. That day is very busy for us and we sell most of our tickets then. Running the fundraiser alongside a large sale has really worked for us, especially since the donation goes to an on-campus organization that directly benefits students.”