At the end of September, Pope Francis made a historic visit to Philadelphia. This coincided with the final festivities for the weeklong World Meeting of Families, the world’s largest gathering of Catholic families. Because it had been years since the last papal visit, Neumann University Bookstore Director Natalie VanWyk knew it would be important to acknowledge the event, but also realized that she could use it to increase traffic to the bookstore.

“Our school is a small, Catholic, Franciscan college and as such, Pope Francis’ teachings really reflect the values of our institution,” she said. “Every day, the news had stories about his upcoming visit — everyone was just getting really excited about it. We wanted to generate additional interest among the student body so we brainstormed some in-store events and put together a display.”

One of the first items VanWyk ordered was a life-size cardboard cutout of Pope Francis, which ended up being one of the most popular features of the display.

“It’s really lifelike,” she said. “Everyone who came in the store wanted to pose with it, and asked me to take their pictures. We saw this huge response, even from our Pepsi and Herr’s pretzel delivery guys!”

The display also had several of Pope Francis’ books, a plush doll, buttons, stickers and other small mementos. 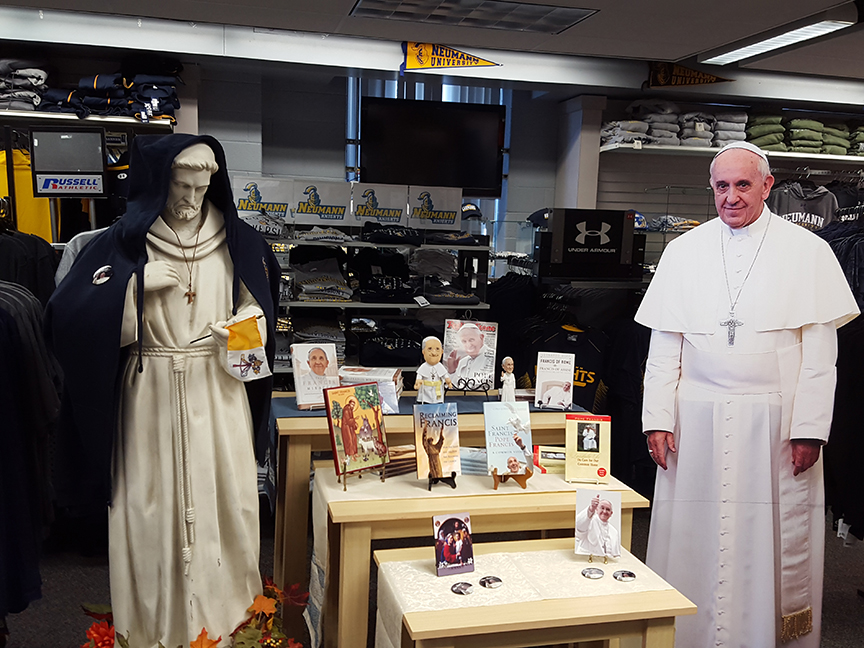 In addition to preparing for the papal visit, the university housed a number of pilgrims who had walked from Baltimore to attend the World Meeting of Families.

“Interest was just tremendous in the area because of the meeting,” VanWyk said. “To sort of piggyback on that, we decided to hold an essay contest about what the gathering meant to our students.”

The bookstore offered great prizes as incentives, with the first-place winner receiving free textbooks for the spring semester. The second-place winner won a $100 gift certificate to a popular local convenience store, and third place received the Neumann University hoodie of their choice. VanWyk enlisted the English department for help in judging the entries, and said that they were very pleased with the level of participation.

The store also sponsored a coloring contest, open to both the student body and the young attendees of the university’s child development center. 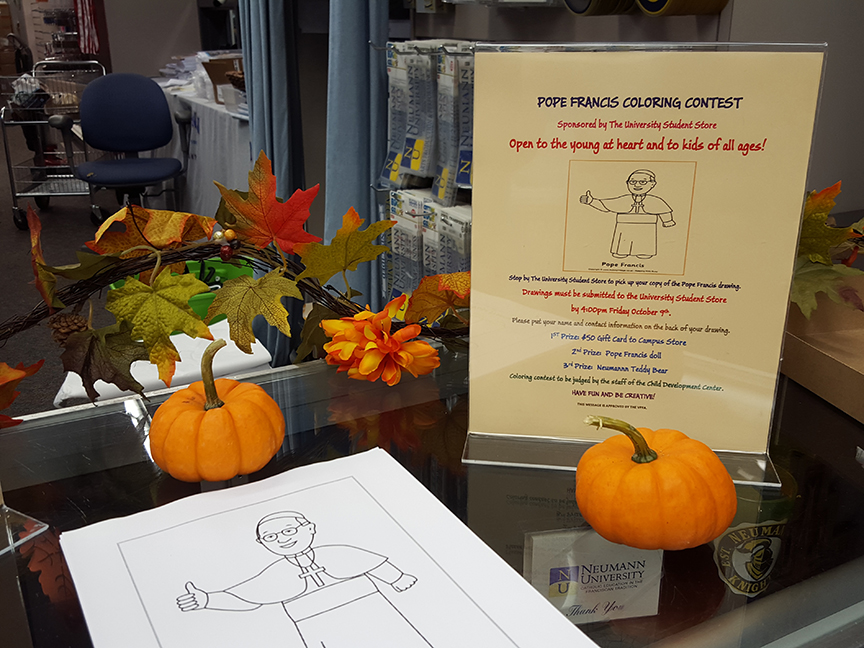 Prizes for the coloring contest included a $50 gift certificate to the store, a Pope Francis doll and a Neumann University teddy bear.

The final activity VanWyk planned was a sale on gifts and merchandise, tied to an inexpensive treat.

“This was the biggest hit of all,” she said. “We handed out free Pope-sicles!”

The staff bought popsicles and placed stickers with pictures of Pope Francis on the front, and different colored dots on the back. If customers found a red dot, they received 50 percent off their purchase in the store. A yellow dot got them 30 percent off and a red dot meant 25 percent off. They also had over a month to use their discount, as long as they came in by Oct. 31.

Not surprisingly, the feedback was very positive.

“We sold quite a bit of merchandise,” VanWyk said. “We also created a good amount of buzz, which was our initial goal. We even had instructors coming in to get their Pope-sicles, saying that their students had been really excited about them.”

To other stores who might want to create a similar sale correlating to a local event, VanWyk advises planning ahead.

“Anything like this takes a lot of work, and a lot of forethought. Also, consider getting your faculty and school staff involved where you can.

“While it was time-consuming to get all of these activities together, it was worth it. With the price of textbooks always seeming to be in the news, anything you can do to show your students and community that you have something positive to offer, and that you’re on their side, it pays off.”