It's March and you know what that means: All over the country, campuses are beginning to empty as students make a beeline for their spring break destinations. No matter where they travel, you can bet that they’ll have their phones in hand — so a great way to keep interaction up is by running some kind of giveaway (like a photo contest) through your store’s social media accounts. This is the third year that the Old Post Bookstore has invited their customers to share spring break pictures featuring Vincennes University gear for a chance to win gift cards to the store.

The contest is open to anyone who has liked the store’s Facebook page, and everyone is encouraged to enter, whether traveling or staying on campus during the break. All participants receive a coupon for 30 percent off VU apparel, with $175 total in gift certificates given out for first, second, third place and a “most creative” category.

Because the bookstore staff and their families aren’t eligible to participate, they get to select the winners. According to Assistant Manager Cathy Combs, getting to review the entries is a lot of fun.

“Some of our students put a lot of thought into their photos, so we've seen face paint, grandparents with their VU coffee mugs, cats, swords — even a dog wearing a VU T-shirt! Our furthest entry was submitted by a recent VU alumnus living in Germany,” she said. “We’ve received entries from students who were on a cruise, on the beach, skiing, ice fishing, or on mission trips serving others.”

After the deadline, the staff will vote secretly for their favorites, then tally the results. Winners will be announced online as well as in-store Monday, March 16, and Combs says the tradition will absolutely continue next year. 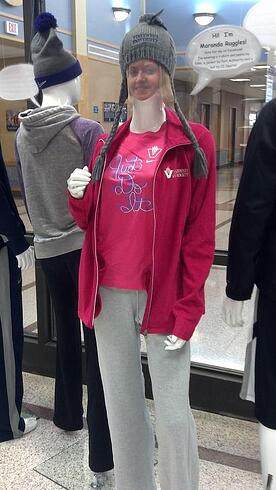 In the past, the store has also offered other photo-themed events like one featuring the school’s mascot or centered on the selfie trend. Other popular contests were a “No Shave November” Mustache Contest (with a loose definition of facial “hair” allowed, including some created with yarn and construction paper) and “Be a Mannequin for a Week,” where students got to deck out the front window mannequins with clothes and accessories from the store. In addition to items like backpacks, sunglasses and VU apparel, each mannequin had a student’s picture over its face. The finished projects were displayed in the window and on Facebook.

“We are always looking for fun contests and competitions to try to engage our students,” Combs said. “The most participation usually comes from when pictures are involved!”

Inspired to do a similar event of your own? Check out this marketing plan to get you started with your own Spring Break photo contest, or this one for instructions for a social scavenger hunt!