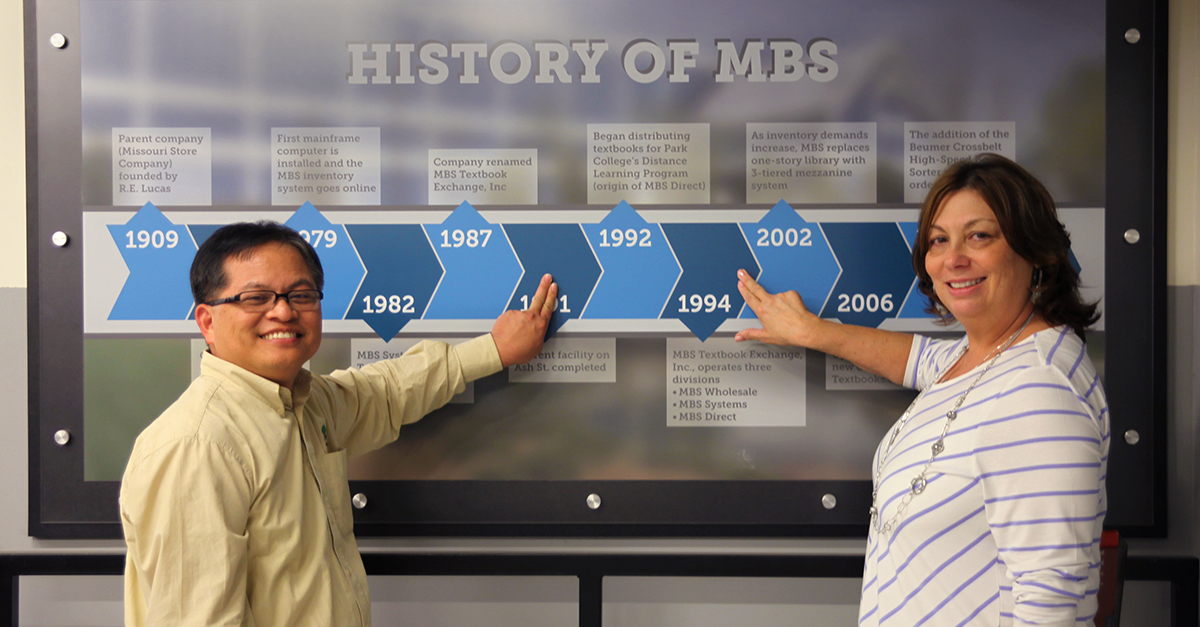 That became immediately apparent when they walked by MBS' company timeline during their most recent of many tours in our Columbia, Missouri warehouse. From green screen to GUI and from print to digital, they saw MBS change as it evolved with emerging technologies and continued to shape college retail, and spent time last week between systems training sessions reminiscing over the past two decades in the college retail business.

"I first came to MBS as a student worker," said Paule, who started working in college retail in the 1980s. That was back when we still used green screen, it was a big deal when everything upgraded to the Baby/36 computers."

Paule said many of the advancements in recent years have made things store staff have always had to do easier, such as more robust POS systems that could scan barcodes on books and automatically manage credit card information.

"Before you had to price the book in charcoal — you'd carefully write 'NEW' and the price on the inside cover," Paule said, laughing at the memory. "Then you had to stamp 'USED' on all of them as you bought them back, and at the end of the term pull credit card information by hand manually and figure out how much you owe each company. It was cruel!"

For Swanson, who started training at MBS in 1996, the shift away from older models of technology was most exciting for her when it meant the end of screechy, error-prone dot matrix printers. It also helped her store significantly boost her rental program.

"When we first did rental, we were managing it manually on index cards," she said. "We worked with another system to attempt to streamline our rental program, but it was too small for what we needed to do, so we went to MBS for help."

While they enjoyed remembering problems of bookstores past — including Paule's color-coded labels and Swanson's store flooding the night after installing her new POS terminals — both directors took some time to look to the future, as well. In their experience, they both said there was one thing bookstores could count on: Books.

"Books have stayed the same," Swanson said. "People were saying even before eBooks that everything was going to be on a CD and we were all going to lose our jobs, and it never happened."

But Swanson said that may change as children who grew up with handheld technology grow into college students. Both she and Paule have noticed shifts toward eBooks at their stores over the past two years.

And it's something they're okay with.

"We're big advocates of open source books," Swanson said. "I think they actually enhance our sales, if someone doesn't have to pay for one of their books, they can pay for the other four. Plus, even with the digital versions being free, there are students who will still come into the store to buy the print version."

Her advice for staying successful in the future of retail? The trick is to hire a good forward-thinking staff, network extensively and collaborate with other stores, and keep an open mind about your business.

"We love what we do, we love our students and we try everything. It may not always work, but we always try. We cut prices, and our sales are up. We may have a variable margin, but if we don't try evolving the way we think, it's not going to work."