The Co-op Store Gets Students Engaged with Buyback

One of the best things about this close-knit industry is the willingness of college stores to band together; to share ideas in the interest of helping others succeed. In fact, that’s the very concept that Foreword Online was founded upon. 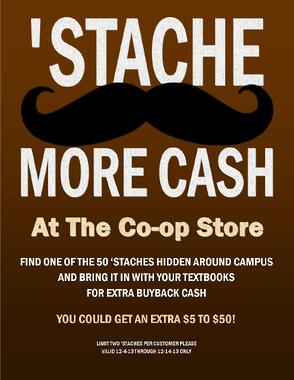 For example, The Co-op Store at Indiana University of Pennsylvania sourced the theme for one of their most recent promotions from nearby Slippery Rock University Bookstore. On a recent visit to their store, the staff mentioned that they had done a moustache promotion that their students really responded to, which got textbook director Sara Ellenberger considering how they could build on the theme at The Co-op Store.

“I had been thinking about how we could do something with moustaches, and the ‘Stache More Cash promotion was just something I thought up while I was working on the buyback list. I ran it by my student workers, and they got really excited about it, so I knew I was on to something good," she said.

Now, they’re passing their idea along as inspiration for other colleagues. During buyback, the store hid fifty moustache vouchers throughout campus, each with a designated value. In total, there were thirty-six $5 vouchers, ten $10 vouchers, three $20 vouchers and one valued at $50.

“The goal was to offer students a fun way to engage with the store and to drive more traffic to our buyback,” said Ellenberger. “I sent my student employees out to hide them. They put them on bulletin boards and walls, bathroom mirrors, stair risers, statues, etc."

To make the $50 ‘Stache extra special, the student employees pinned it to their mascot Norm's beak and sent him out on campus. The lucky students who found the moustaches could redeem them by simply selling back at least one book. They then received the amount on their ‘Stache plus the cash for their books.

“Each moustache had a barcode on it that was linked to an ISBN that would buy in the buyback screen just like a book. So, the buyers could easily scan it and see how much it was worth,” she added.

Throughout buyback, 17 of the moustaches were redeemed, including the grand prize of $50. Although this wasn’t the impact she was hoping for, Ellenberger is eager to make a few adjustments and try the promotion again during the upcoming buyback season.

“The students who redeemed them and got extra cash were definitely happy,” she explained. “I'd like to do it again in the spring and really try to generate more knowledge of the promotion and more excitement about it. I think since it was a kind of last minute idea, we could definitely do a better job of promoting it. Something to work on next time!"