VCSU Bookstore makes an appearance in downtown Valley City each year as part of the local Chamber of Commerce's "Crazy Days Sale."

College towns provide an additional revenue stream for campus stores, but many have a hard time bridging the campus-to-community gap. 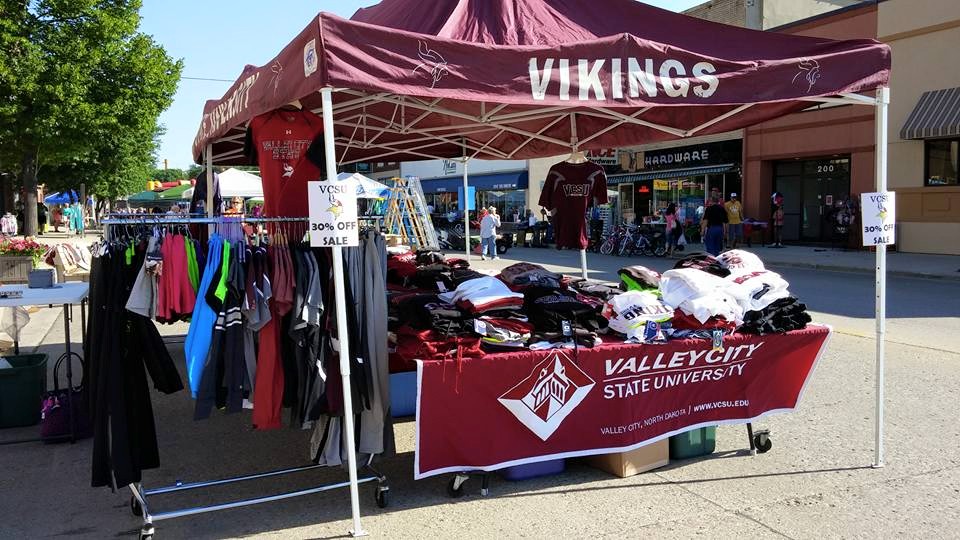 The VCSU Bookstore does that every year with the community’s Crazy Day sale. The store steps off the Valley City State University campus to set up shop in downtown Valley City, N.D.

Each year, the Valley City Area Chamber of Commerce hosts a "Crazy Day" in late July, where two street blocks are cordoned off so local merchants can showcase their wares outside. The event has included raffles, water slides and inflatable games for children, bingo, food and more.

VCSU Bookstore Manager Todd Rogelstad said his store is one of the handful of businesses that join the festivities from outside of the downtown area.

“It is an opportunity for us to reach customers that normally don't make it into our store, although most of our customers at the sale are from the area,” Rogelstad said. “Many people seek us out every year downtown, and we often hear ‘I just never can make it to your store.’”

Each year to prepare, Rogelstad and his staff borrow tents and table covers from other departments on campus, and recruit help from the school’s Facility Service staff to carry equipment and gear to and from campus.

Marketing for the event is handled by the Chamber of Commerce through newspaper and radio ads, while the bookstore promotes its own involvement with Crazy Days through email sends and Facebook messaging. The event proves a great way to move clearance merchandise while serving fans who can't normally make it to the store.

“We move quite a bit of merchandise at the downtown sale," Rogelstad said. " We discount it pretty heavily, so don't make a lot of profit, but we typically take short-sizes and apparel that just isn't moving. It is successful in the sense that we move some merchandise that is just sitting at the store."