Instead of sending out the same emails to faculty that they use every year, Washington and Lee University in Lexington, Va., has chosen to go a different route. Last summer, they decided to create and distribute about 350 “Focus on Faculty” folders in an effort to educate their professors on the role they play in the success of the bookstore. And after last year’s folders went over well, Book Manager Hannah Wallace decided to distribute them again this fall. 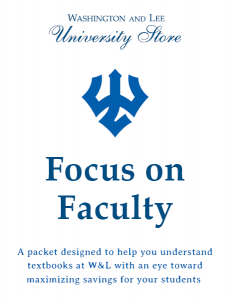 Though she was not in the same position she is in now, things went smoothly the first time around, according to Wallace. “From what I gathered, [the folders] went over pretty well. We got some good feedback. Because of that, we kept with the same general idea this year as we did the year before.”

Inside every folder, which each faculty member receives, are a number of handouts that Wallace believes will prove helpful. Each folder includes documents like contact information for each member of the bookstore staff, instructions on how to use Faculty Center Network and information about the importance of adoptions, among other things. They have even adapted the adoption information into magnets with the goal that the information will be easier to keep track of in that format.

“It’s good for [faculty] to have a physical thing to look at,” Wallace said. “It’s saying the same things we usually say, but in a way that we haven’t presented. The folders show how their cooperation helps the bookstore. It shows how much their adoptions matter.”

According to Wallace, the plan is to hand out the folders to undergraduate, graduate and law school professors sometime during the fall so they can get everyone up to speed on time and prepared to submit their adoptions before the school’s deadline. And if all goes well, as Wallace and her staff expect, the bookstore plans to use the Focus on Faculty folders to take the same approach in the future.