In an effort to drive more traffic into their store and away from online retailers during rush, the staff at UC Davis Stores was struggling to come up with ideas that would meet those goals. Last year, they tried giving away t-shirts to entice students to come visit the store, which worked in the sense that that event was popular, but ultimately came up short of expectations when the store underestimated its audience and ran out of shirts in about 10 minutes. Back to the drawing board. 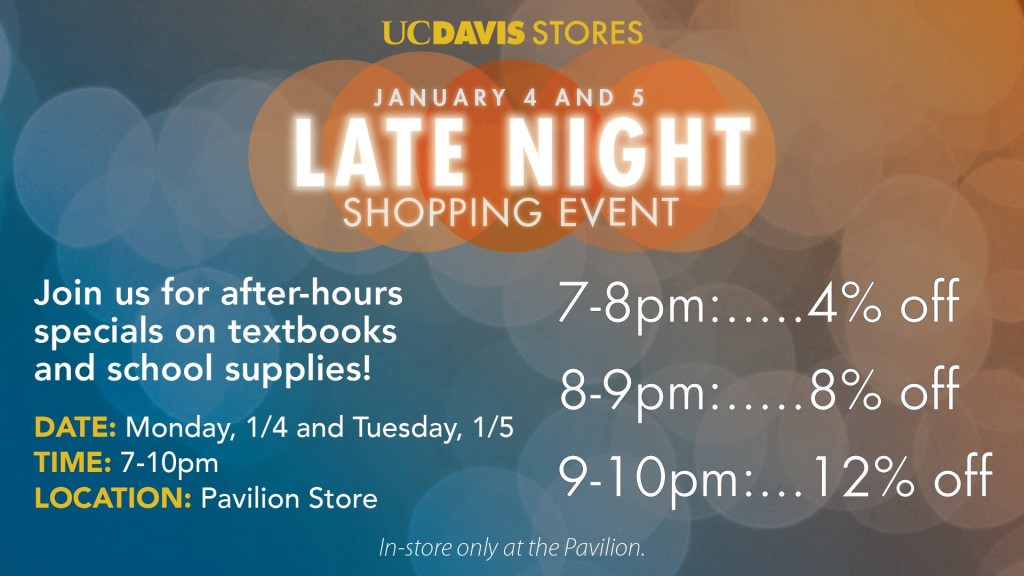 The store’s latest idea, and one that has turned out to be far more rewarding, was to keep their doors open a bit later than usual and offer discounts for students that might not always be able to visit during the days they have class or are not scheduled to be on campus. The format was pretty simple: The later the hour, the bigger the discount.

“We noticed over the years that students wouldn’t even come into the store when they saw how crowded it was. We weren’t certain how many of them ever really came back,” UC Davis Stores’ Assistant Director Kato Meley said when asked about what inspired this idea. “We wanted to spread out these sales throughout the day and we wanted everyone to be able to enter the store whenever they wanted.”

Those desires became a reality when the store began to advertise their Late Night Shopping Event, which ran Jan. 4-5 (a Monday and Tuesday). From 7 to 8 p.m. each night, the sales started at 4 percent off of textbooks and school supplies. At 8, the discounts increased to 8 percent before reaching their highest value of 12 percent from 9 p.m. until the store closed.

As you may have been able to predict, the students at UC Davis were in no hurry to get to bed and were more than happy to wait until 9 o’clock and get that 12 percent discount.

“It became almost like a party experience,” said Assistant Director of Finance and Operations, Mike Su. “There were much longer lines than we ever thought we’d get.”

Despite planning on closing around 10 p.m. and having 15 open registers along with two dozen employees around the store, the UC Davis Stores staff didn’t get the last person out of line until 11:30 on Monday. Things were a bit smoother on Tuesday, as the last person left around 10:15, but these were two hectic days, to say the least.

Yet despite that wait, the store didn’t hear any complaints coming from the students that had to wait in lines that wrapped around the basketball arena that holds the store’s temporary location. They may try to tweak some things during the next iteration of the Late Night Shopping Event to try and get more customers into the store between 7-9 p.m., but it goes without saying that the current version was a huge hit with students.

“We wanted to offer students a reason to come into the store at a time when they wouldn’t normally,” Meley said. “This definitely got people to visit the store that I don’t think would have come in otherwise.”