The Wichita State University Shockers were among the competing teams, which means one thing for the University Bookstore and Alumni Association: the annual alumni pep rally. Fans flock to St. Louis to catch the big games and the bookstore follows to sell spirit wear, memorabilia and more. 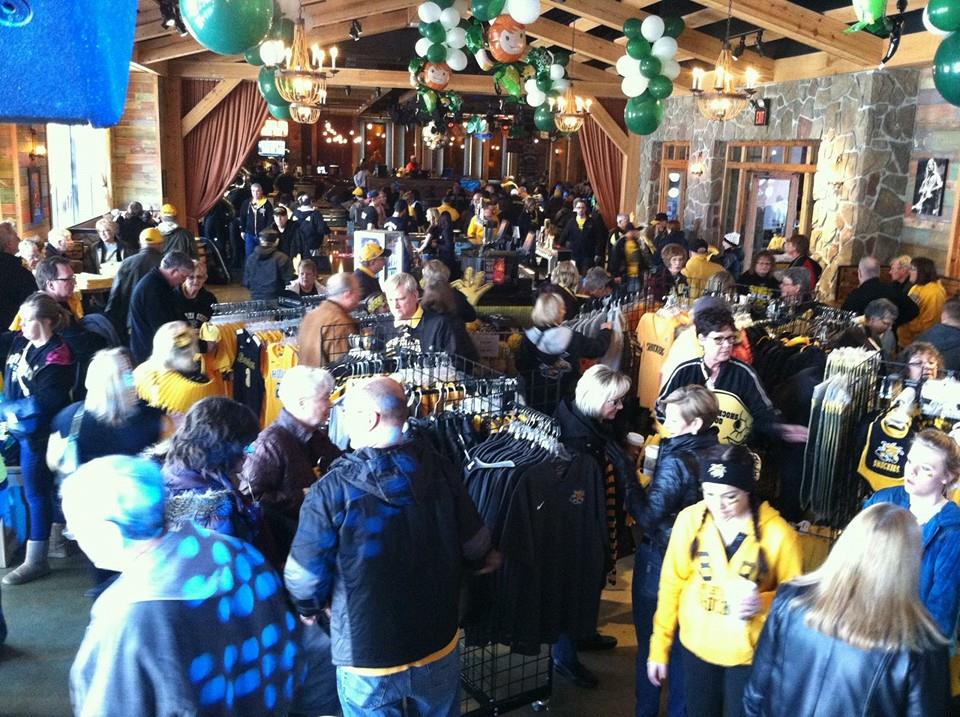 In six total hours of operating time over the course of the tourney, the Wichita State University Bookstore pulled in sales equivalent to two great game nights in their home Koch Arena.

“If you can do the sales we did in a little over 6 hours of work, you must be doing something right,” says Andi Stipp, Director. “We have nearly doubled in sales since 2013. Last year was an exceptional year since we were riding an undefeated season high, however we were not far off in this year’s sales.”

The store also made use of MBS’ Mobile POS Suite. They were able to set up fully integrated registry function in both the hotel and Ballpark Village, which made less work for staff.

“Since we’ve started using the mobile POS system, it’s allowed us to be more efficient and effective, as we don’t have to take a complete inventory of what we take and then take it back and reconcile it,” Andi says. “It uses our system, so the reconciliation process is 1,000 times smoother than it was before. Plus customers get receipts, it’s like in store. There’s not a lot of backend work you have to do prior to leaving and when you get back.”

After trying a few different venues to host their shop-away-from-shop, Andi and her staff had typically held sales in the hotel the alumni were staying in during the Alumni Association’s events. This year, the Alumni Association held watch parties in St. Louis’ Ballpark Village, giving the bookstore a unique challenge.

“We open up three hours the before game time, and once the pep rally ends, we will sell until we serve the needs of our last customer. Friday we sold for three hours, after which point we tore down everything, shrink wrapped our merchandise stands, packed it on a truck and enjoyed the game. Then we went to the hotel, unloaded the entire truck and set up to sell in the hotel. Unfortunately lost Saturday’s game but would have brought back Sunday to sell.”

Staff braved frigid 15-degree temperatures, early mornings and elevator doors and tiresome stair climbs — the elevator doors weren’t quite big enough for the store’s equipment. But the relaxed atmosphere with a bar and club music served the store well, as they moved a variety of merchandise, ranging from bargain T-shirts to higher-end merchandise.

“We bring everything from women’s bling to kids clothes to spirit foam hands, rally beads, earrings, face tattoos, and even outerwear like coats because people from out of town don’t know what weather going to be like,” she says. “We also try to bring awesome price points for middle-of the-line shoppers looking for great deal like quarter zip for $34.99. And if we win conference we bring conference shirts and have a tradition where we create a custom shirt for Arch Madness.”

With a mobile POS and a popular event, Andi said Arch Madness is a great event to expand the store’s customer base.

“This is our time not only to see fans who travel on tour busses but see those from all over the country. We had people from California fly out, it’s a good opportunity to touch our fan base who are not local to the Wichita market.”