Get Buy-in: The Dos and Don'ts of Increasing Faculty Engagement

If you want to get buy-in for the campus store from faculty, it’s good to know the dos and don’ts of increasing faculty engagement. Set your sights high. Envision the kind of faculty engagement you want for your store, but remember: like any company or cohort, faculty members have their own culture, complete with common taboos.

The following are two of many possible scenarios for what can happen when campus stores aim for increased faculty engagement. In one, the campus store has complete buy-in from teachers. In the other, it would take a miracle to attain better engagement.

Let’s start with a picture of what can happen when faculty are fully engaged with the campus store mission.

Lev the longtime lecturer is en route to his fourth Monday class when his smartphone pings. An email notification from the campus store flashes on the screen. He doesn’t have much time, but he opens it right away. He loves the campus store. Even though he submitted his adoption requests weeks ago, he’s concerned. What if he did something wrong? He doesn’t want to be a source of campus store chaos. They’ve got enough on their plates. His courses for next semester are going to be as packed as they are this term. Last year’s decline in state funding meant the department had to cut back on adjuncts. His class sizes increased from 25 maximum to 35.

Lev doesn’t mind the big classes. He’s a pro. He started 15 years ago as an adjunct, then got lucky: a lecturer position with benefits opened one year when the department’s budget was unusually plump. By the time the next series of cutbacks rolled around, he’d had his annual contract renewed five times. That provided a little security. It’s policy to cut newcomers first.

That was a decade ago — long before the bookstore started hosting teacher appreciation parties every winter. Lev feels ashamed when he remembers how he once put off adoption submissions. If only he’d known!

The problems came from his habit of switching up his syllabus once a year. Without changes, the 4:4 schedule of writing courses gets tedious. Plus, adopting new texts gives him an excuse to dive deep into work from writers he hasn’t studied. There’s nothing like the learning that comes from trying to explain the miracles of a novel or story to a bunch of students who think they hate reading and writing. He still changes his syllabus, but now he reviews books early because he knows what happens when he dawdles with adoptions. The store can’t get enough used options, and some students refuse to buy the books. Or, they order from some fishy site and the books don’t arrive until after midterms.

Lev hated rearranging the discussion schedule while students waited on bargains. But how could he not? They were only trying to save money. At least they were buying the books.

Back then, he worried he’d never be able to engage his students with reading, but now he knows that he was part of the problem.

At the first campus store event, he spoke to some of the associates about how sad he was that students seemed to avoid book purchases. The staff commiserated. But a manager also explained that early adoptions help. That’s when Lev learned about how the used book business works and why his late adoptions made it harder for students to get affordable materials on time. He felt terrible. Ever since, he always tells students to get their books at the campus store. “Sure, you could buy them from some outside website,” he says. “But the bookstore actually cares about students. The campus store has your back.”

The email message from the campus store is brief: “If you’re interested in saving students money with digital course materials, stop by the campus store Nov. 1 at 4:00 p.m. for snacks and discussion. Reply yes or no to this email to RSVP.” Lev replies “yes” immediately.

“Are you teaching next term?” a first-year asks, as he enters the classroom. It’s enrollment time, so he’s been getting that question all day. Students like consistency, especially freshmen. It makes life a little easier when they already know how to navigate one of their teachers' expectations.

Snapshot: The DOs of Faculty Engagement

As Laura the Lecturer hurries across the quad to meet her Psych 101 class, another campus store email notice pops up on her smartphone screen. Normally, she would ignore it until later. She’s already running late. But the subject head, written in all caps, startles her: “YOU ARE LATE: TURN IN YOUR ADOPTIONS NOW!”

The email informs her that her name is on a “list” of those the campus store calls “negligent faculty.”

She doesn’t have time to figure out how to get in touch with them. When Laura isn’t prepping classes, grading essays or communicating with students, she’s scouring the Chronicle of Higher Education for listings that might lead to a secure job — a multi-year contract that at least lets her apply for tenure. She knows it’s far-fetched. The field is so competitive. But she’s not ready to give up on her dream, after working years in graduate school and accumulating all that debt as an undergraduate, when she first committed to becoming a scholar.

Now, the campus store wants her to decide which book she’ll teach next term — before she’s even had a chance to evaluate the textbook she adopted for this term! She knows the students don’t like it much. It seems like only about half of the 200 students in her lectures have even looked at it. She’s been ordering review copies from publishers right and left. But between class prep, grading, job applications and conference proposals, she has not had a minute to sit down with one. The glossy tomes are stacked  in a corner of the office she shares with another Arts & Sciences Lecturer, Luke.

Luke told her early in the term never to send students to the campus store. He thought they marked up the textbook prices too much. When the semester started, she told her students to buy the book wherever they could find the cheapest price. And she warned them that the campus store might not be the best place. Now, she’s glad she did.

A second-year in the front row makes eye contact with her.

“Cool. Are we going to use the same book?” the second-year asks.

Laura sighs. “I have no idea.”

Snapshot: The DON'Ts of Faculty Engagement

What Campus Stores Can Learn from Laura the Lecturer

Clearly, the campus store in the second scenario isn’t doing well with faculty engagement. The miscommunication between Laura and the campus store could have happened for many reasons that have little to do with the store’s intent. First, it’s unlikely the store gouges students. What’s more, the managers probably wouldn’t resort to negative messaging if they weren’t under pressure from all sides: students, the administration — and the competition. But that’s just the problem. The store’s attempt to engage faculty with threatening language fuels negative word of mouth. The more the store threatens, the less likely it is timely adoptions will arrive. The cycle becomes self-fueling.

It’s doubtful that any store’s faculty engagement efforts would be as flawed as the one depicted in Laura the Lecturer’s scenario. However, it’s easy to make communication mistakes under pressure. Consider Laura’s scenario a guide to everything a campus store should avoid when engaging with faculty.

What Campus Stores Can Learn from Lev

Lev understands exactly why he needs to submit early adoptions. The campus store has created opportunities for in-person contact with faculty appreciation nights and informal discussions about how to save students money. Every message Lev receives from the store is connected in his memory to real human beings who share his interests in students and books. That makes campus store emails hard to ignore, even when he’s in a hurry.

It doesn’t matter how often Lev visits the campus store himself. He’s a full-blown collegiate retail evangelist. He allies with the college store, because he wants his students to buy books locally and read often. Because he knows the campus store has an education-focused mission, he recommends it to all his students and tells colleagues to recommend it to theirs. The positive word-of-mouth he spreads among students and teachers brings thousands of newcomers the store each year. It also helps keep the store’s on-time adoption rate high. Lev isn’t shy about sharing what he’s learned with other teachers. They want to save students money, too.

A Lev the Lecturer scenario can easily become reality. All the campus store needs is a strong message, empathy for common faculty concerns — and knowledge of basic faculty communication dos and don'ts. 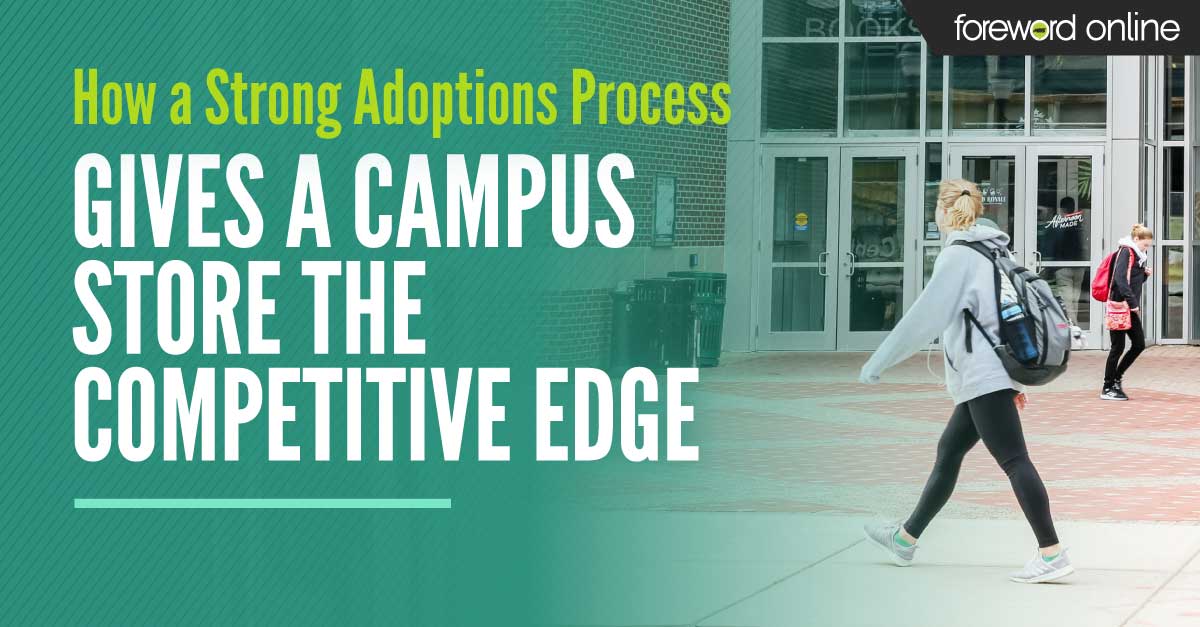 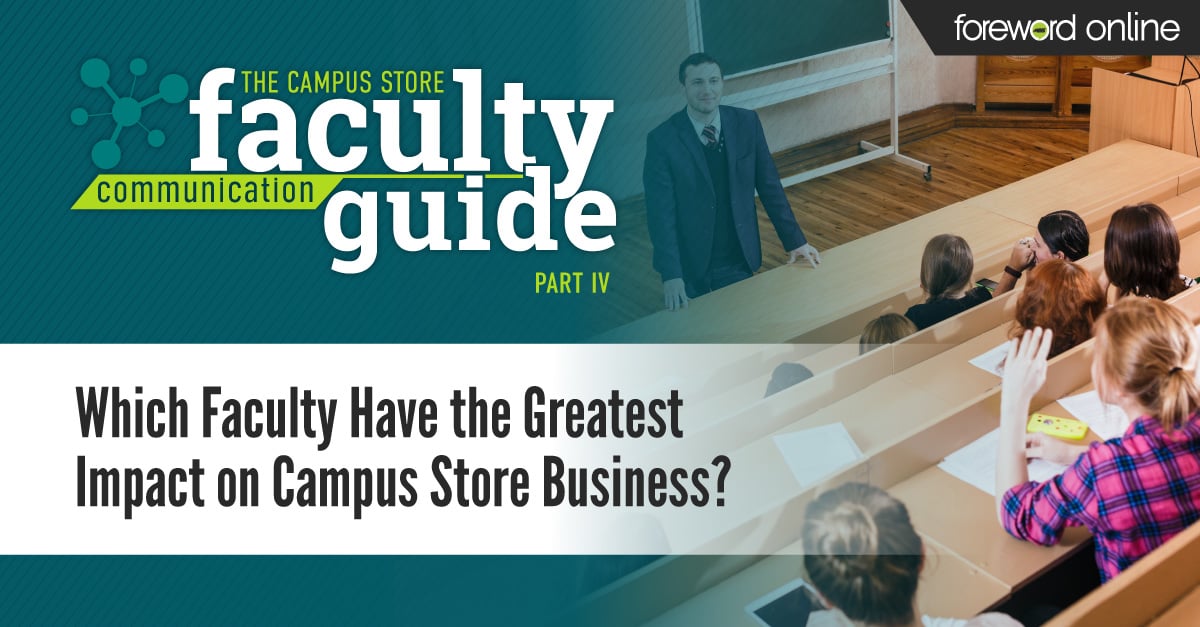 Which Faculty Have the Greatest Impact on Campus Store Business? An Illustrated Guide