NDSU Opens the Doors for an After Hours Bash

Posted by Kate Seat on 9/14/15 12:00 AM
Topics: back to college, college store stories, bookstore events

Last week, NDSU Bookstore welcomed students back to campus with their eighth annual After Hours Party. This tradition is a nice break for staff and students alike after the hectic textbook rush ends, combining an ice cream social with simple games and plenty of prizes. Both the free ice cream and the prizes seem to be equally big draws.

“Each year, we see a turnout of several hundred,” said Dolly Wadholm, promotions coordinator and assistant to store director Carol Miller Schaefer. “While they’re mostly freshman, we always have returning students who had a great time the previous year.”

This year, Wadholm said the turnout was even higher, as were the store’s clothing sales.

“The party was a huge success,” she said. “But the event would not happen if not for our amazing student employees! They are the best!”

Throughout the course of the evening, the staff ran through 25 gallons of ice cream (vanilla and Moose Tracks), and multiple containers of toppings and whipped cream 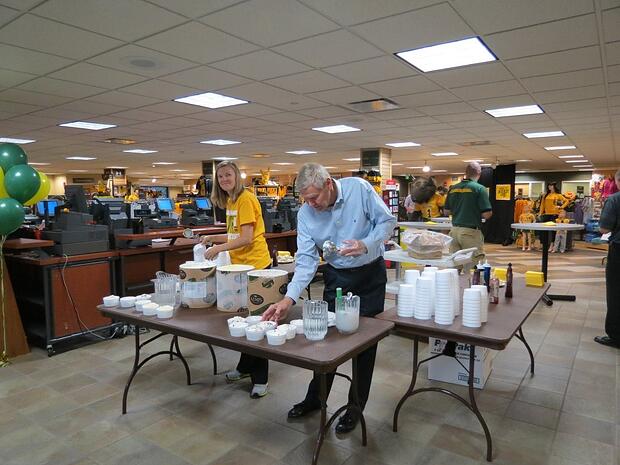 In addition to getting their fill of free ice cream, the students also had several chances to win 35 great prizes throughout the evening. In order to qualify for each raffle entry, all they had to do was play any of the “minute to win it” type games. Some of the more popular games included “Bison Scramble” (a puzzle- assembling game with the school’s mascot), “Sticky Balls” (rolling marbles down a table with double-sided tape) and “Suck it Up” (moving M&Ms ® with a straw). 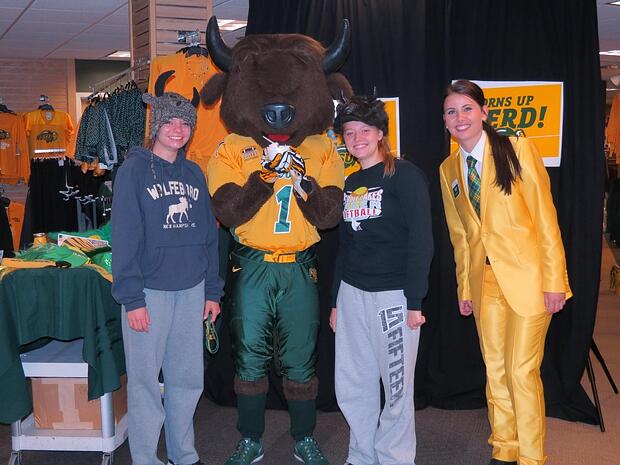 Prizes were mainly sourced through the bookstore’s vendors, ranging from sweatshirts to gift cards to electronic equipment. There also was a photo booth where students could take pictures with props and Thundar, the school mascot.

Football coach Chris Klieman, Assistant Basketball coach Eric Henderson and Director of Men’s Basketball operations Casey Matthews also made special appearances. After last year’s fourth consecutive championship season for the Bison, the crowd was excited to have a chance to mingle with them. 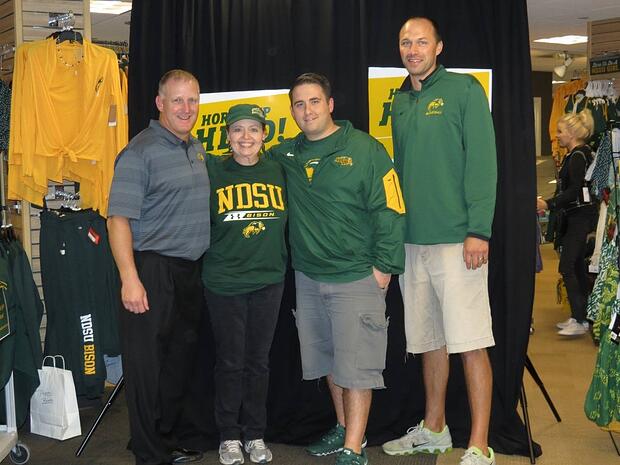 To promote the party, the staff advertised in-store on TV sets, around campus with posters, with an email blast and through their social media accounts.

The event only took a few hours to set up, Wadholm said, attributing that speed not only to the fact that this was the eighth year that they’d organized it, but that they steered clear of any unnecessary complications.

“It gets easier and easier,” she said. “I would advise other stores to keep any events with games as simple as possible. The only pieces we have to replace every year are very inexpensive, the games are easy to run and the students have a blast!”